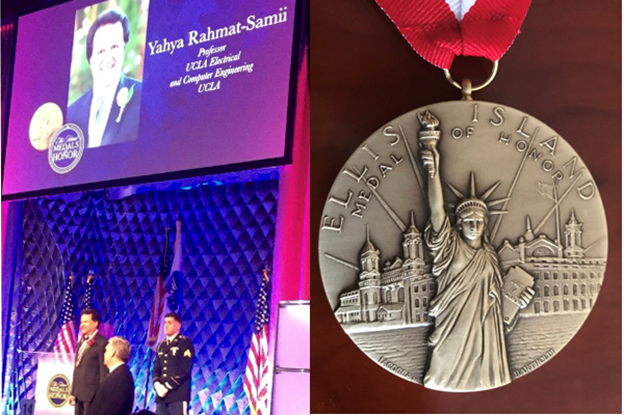 Distinguished Professor Yahya Rahmat-Samii, Foreign Member of the Class of Natural Sciences, was awarded on May 11, 2019 the Ellis Island Medal of Honor by the National Ethnic Coalition of Organizations. The award ceremony was held at the historical Ellis Island building on the ground of Ellis Island, New York.  The Medals are presented each year on historic Ellis Island to a select group of individuals whose accomplishments in their field and inspired service to USA are cause for celebration. They embody the spirit of America in their celebration of patriotism, tolerance, brotherhood and diversity. They recognize individuals who have made it their mission to share with those less fortunate their wealth of knowledge, indomitable courage, boundless compassion, unique talents and selfless generosity; all while maintaining the traditions of their ethnic heritage as they uphold the ideals and spirit of America. Since its founding in 1986, the Medal has been officially recognized by both Houses of Congress as one of our nation’s most prestigious awards. Through the years the award has been awarded to  diverse Americans including seven US Presidents, as well as esteemed Americans such as Nobel laureates and many others.